Hi Rob! Just started the beginner’s course and I’m really enjoying it. I’m using Ableton 11, and was setting up the suggested pad layout when I ran into an issue. I solved it, but it brought up an interesting question.

Setting up the pads in Ableton is easy, just drag and drop the samples on the pads in the display then save as a preset. I modified one of the included drum racks that way and thought I was done. But changing the pad assignments didn’t change the choke settings, and the closed hihat and snare pads on the right side interrupted each other. Pretty easy to solve, once I realized what was going on and found the chaining controls.

But it made me wonder about the best choke settings for finger drumming. Setting a choke on all the hihats is standard. But I’ve also been testing a choke on the two snare pads. It gives a much cleaner sound on flams and the like. And choking the kick pads seems like it would be useful, if you want the sound of a drum kit with a single kick.

This made me wonder what your choke settings were, and if you had any advice. I also wanted to mention the issue I had, in case any other Ableton users ran into it.

And thanks for creating this course, it’s a really great resource!

In all honesty, I haven’t really thought about choke settings the way you describe, but there is definitely something to it. If you want one sound to stop when the other starts playing you could do all kinds of interesting stuff with chokes indeed. Not just stop your cymbals from ringing out.

The only choke setting that I sometimes use is the choke for my cymbals. I then use some buttons on my Maschine mk3 to trigegr those chokes, so I don’t dedicate pads to them (on an 8x8 controller there are enough pads so then I probably would but I hardly ever play an 8x8 at the moment).

For the rest I just try and get the sound I want with a combination of playing style and sound design. In Addictive drums you can adjust the curve of a sound, which means a short snare could also be made that way. Not the same as choking though… I’m really interested in seeing what a long snare sound that gets choked off would do. You’re bringing some new inspiration to the table here!

Below is a screenshot of the curve of a sound in Addictive Drums. 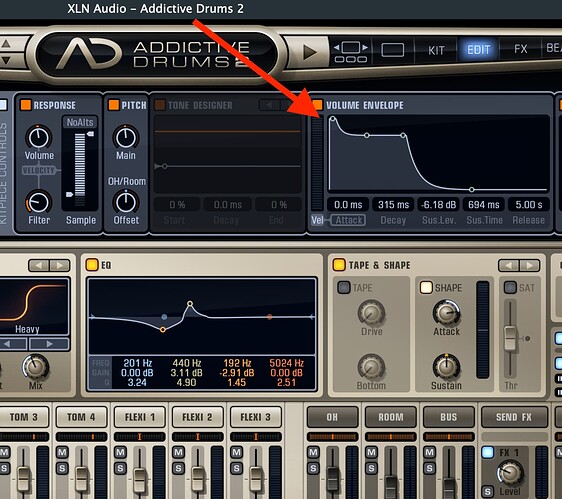