Just starting on the finger drumming journey.
Purchased a Launchpad Pro and have it mostly running on my Mac with EZdrummer2. Thanks to Rob for all the help.

I’m also interested in an ios setup with either a phone or a pad.
I have korg module and added a drum library ($) but didn’t get very far.
Not sure thats the one to start with.

Seems like there are many MANY ios apps purporting to be midi drum libraries. I’m guessing like most apps they are mostly junk.

Has anyone found an app they like for setting up a kit and practicing/playing fingerdrums on ios.

I personally havent found anything great yet. I’m still hoping something like Cubasis(the mobile version of Cubase) will be optimized for M1 macs and then will be ported to iOS with all the functionality to run plugins like Addictive Drums. Then a phoe or an ipad will finally just be like regular computers and the new era of true mobility will have started.

It doesn’t seem to be quite there yet though…

I’ve done a little bit of fiddling with the Launchpad and Garage Band.
I found a generic percussion midi map to give me some note/drum values.
I used Novation elements to modify an existing QFG 8x8 (with rolls) template to honor the generic midi.
I downloaded the new template to the launchpad, connected it to my ipad and fired up garage band.
It mapped pretty well for most of the kits.
Not sure of sound quality as I’m just playing through ipad speakers.
I don’t notice any latency (yet). My ipad is a couple of years old.

It may not be performance worthy but it could make a portable practice rig.
I’m expecting the same results with the iphone

I’m very new to this so much of this may be old info to many. My apologies.
I enclose a photo of the CFG 4x4 termplate with the midi values I used .

If anyone wants the Launchpad Template file I’d be happy to share it.
I’m just not sure how to upload a file to this forum 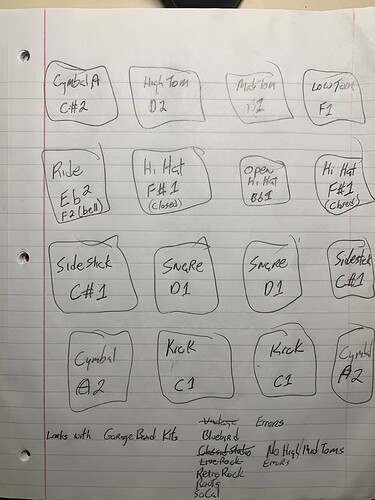 Thanks for sharing! This might be helpful for other finger drummers who want to take things mobile. Also good to hear the latency is at least pretty low. My guess is if you compare side by side with for example a laptop and a fast audio interface you will notice a small difference, but that is probably a tradeoff that a lot of people will be willing to make in order to get a nice mobile rig.

An app for iOS just came out that is nice for finger drumming on the phone or iPad. You can load in your own samples exactly where you want them and practice right on the touchscreen or use a pad controller to play. It’s 5 dollars until the end of June. Sitala

Nice! Will check that out over the summer.

I’ve tried BeatMaker 3 and the kits aren’t bad. There’s a Ludwig acoustic kit for a small cost which sounds pretty good. Getting the pads mapped is a fiddle, but it can be done - I haven’t been able to remap them, but maybe that’s just me.

I also tried DrumPerfect Pro v3 which has a really nice sound engine but is very challenging to use. The interface takes some getting your head around, so not a quick fix. I might go back to it, though, because the way it handles expression and velocity is very nice - essentially it mixes a light and a heavy sound dynamically, depending on velocity.

Finally, check out Velocity Keyboard, which is an input controller that can detect the radius of your taps and translate those into velocity for other apps (including BM3) - very interesting.

I’ve tried to get the Lumbeat Soft Drummer and Reggae Drummer to work with pads without success. There’s so little info on how it’s supposed to work that I can’t figure it out. Maybe someone else can?

I’ve had another go, and this time succeeded in finding the midi settings for the live pads and configuring these. However, the latency with DPP is too much to allow successful use for finger drumming, and this combines with a multi-triggering issue where samples interfere with each other. I don’t think this is hardware, as BeatMaker 3 doesn’t suffer from these issues. It remains a very useful and flexible programable drum machine, but not useful for finger-drumming.

Lumbeat also produce some great sounding drum machines such as Soft Drummer and Reggae Drummer. However, in recent updates the ability to play via pads has been removed from the app.